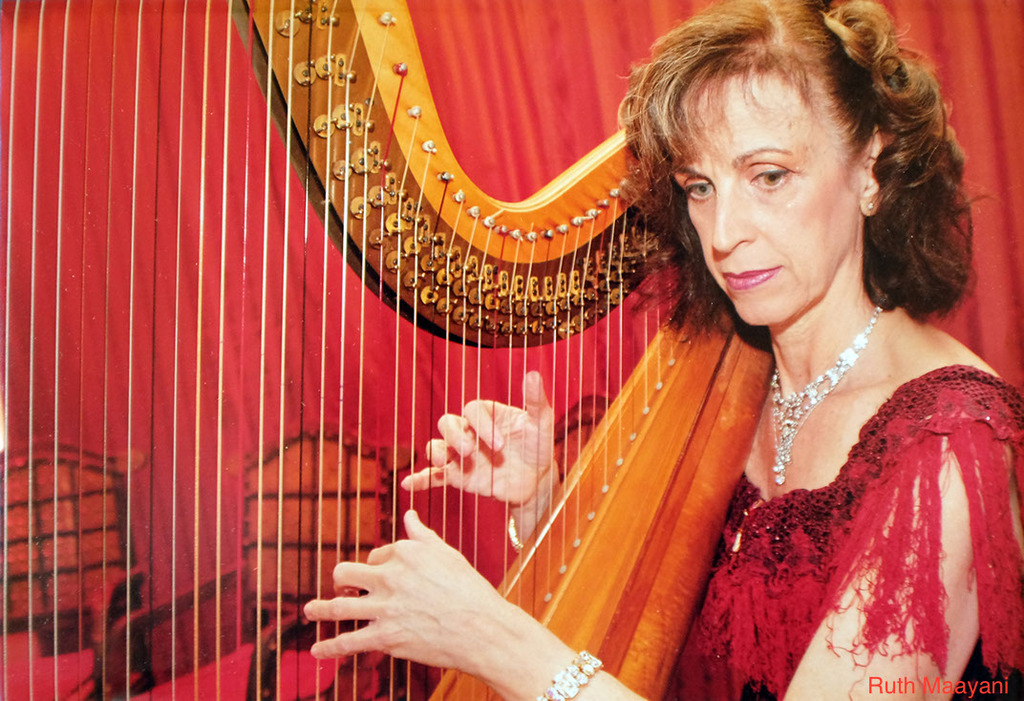 It was both an honor and a sad occurrence to be asked to write a eulogy for our mother, Ruth Maayani. It is not yet five months since our beloved Mother passed away and the pain of her loss is still fresh and acute, yet my sister Ayellet and I chose to see this as a chance to celebrate her unique personality through her dedication to the harp, to music and to her students.

Growing up with the gentle yet focused sound of our Mother’s cultivated harp playing resonating through the home was indeed a privilege. The beautiful concert harp was always situated in the family living room, adding somewhat of a noble touch to the domestic view. Mother’s dedication to music and to the harp was reverent – our childhood home was a demonstration that a priceless way to educate one’s children is through the setting of a clear and constant example to them. The way our Mother went about realizing her values spoke volumes to us. She raised us on her own, yet still found time to meet all our needs and beyond, while making sure that her playing remained at the highest standard. She would practice after we went to bed when we were young, or would drive to Jerusalem twice a day for orchestral rehearsals in the morning and concerts in the evening, so she could spend the afternoon with us.

During her years of freelance work in Israel, her creative mind was also looking for ways to bring music to the community through her business partnership which distributed concerts to schools throughout Israel, a partnership she held for ten years. She played countless concerts for children both through her partnership and through “Sal Tarbut Artzi”. Her ideas for concerts were very original, spanning world music as well as classical, including various chamber ensembles. She herself performed with her lifelong flutist friend, Yechiam Peled RIP, many times, and also including original music composed by Mischa Bleherovich after a beloved children’s book she used to read to us, The Painter and the Bird.

We remember how she spoke of her master teacher at Juilliard School of Music, Marcel Grandjany. It seems that they were well matched in that they were both calm and placid, and he knew how to bring out Mother’s best qualities as a harpist. Her concept of sound called for the use of the tip of the fingers to create a focused and resonant sound that could penetrate the texture of the orchestra and carry to the last row of the concert hall. She would always make sure that each note in a passage or a chord could be well distinguished yet create an even and seamless whole. Having had a master teacher assisted in her becoming a master teacher herself. She dedicated so much to her students – teaching them how to practice, how to be well organized, how to produce a beautiful sound, and all this from the very first lesson.

Mother was not only the teacher of harp playing, she was also a mentor to her students and an example how to live life. Two of her students spoke at her funeral saying how she epitomized the harp for them and that they felt she was a life teacher as well.

Ruth Maayani was one of the central figures of the harp world in Israel and was well respected abroad. Her repertoire spanned all the major works composed for the harp, both solo, solo with orchestra, chamber music and the harp parts in all the major works for orchestra. Mother also gave many world premieres of works by her brother and our beloved uncle, Ami Maayani (1936-2019). Speaking of his extremely demanding compositions, she used to say that those who tackled her brother’s works for the harp, elevated their level of playing dramatically, due to the complex passage and pedal work.

At around age forty, Mother joined the newly established Israel Symphony Orchestra Rishon LeZion. This orchestra also became the orchestra of the New Israeli Opera, which kindled her passionate love for opera and she found great joy in the harp parts of opera, particularly those by Puccini. She also took pride in having played all of his operas.
But it was not only Puccini’s operas that were close to her heart; we remember that Mother mentioned being tearful at the end of a run of The Tales of Hoffmann by Offenbach, and being moved by Tchaikovsky’s Eugene Onegin, to name only a few examples.

Conductors who came to the NIO quickly learned that the principal harpist of the orchestra could be relied on completely and they need not even worry about bringing her in, because she knew all her entrances. We recall how she always used to prepare the parts well in advance, listen to recordings, mark her parts with all the pedal changes and queues of important entrances of other instruments. One particular example comes to mind; during the early 90’s, conductor Roderick Brydon (1939-2010), who was a champion of Britten’s operas and conducted them all over the world, came to the NIO to perform The Turn of the Screw. He wrote to Mother, after the run of performances, that he knew that he needed to pay special attention to harpists when working on this work, but in Tel Aviv, he was calm.
Mother also bestowed the same love on all the major works for the orchestra, most notably, Berlioz’s Symphony Fantastique, Mahler Symphonies and Lieder and the Bartók Concerto for Orchestra.

A special place in our hearts is reserved for the harp parts of Tchaikovsky’s ballets. The Nutcracker, Swan Lake and The Sleeping Beauty were an integral part of our childhood, as well as knowing every note of the beautiful harp cadenzas that resonated in our home.

For us, her daughters, Mother’s going out in the evening to play concerts, brings back the warm and familiar feeling of her routine: taking a proper nap in the afternoon; practicing the part before each performance, whether it being the first or the last; showering and donning black concert attire and us hearing the click of her make up box. She would always leave early and arrive at the opera house’s pit well in advance to make sure the harp was well tuned during the quiet before all the other musicians came to warm up. Coming to operas many times, we remember coming to say hello to Mother over the pit, to find her tuning the harp again.

Mom had always said that is it important to know when is the right time to retire; when she was at the height of her powers and not beyond. She took the first opportunity to do so and dedicate her time more fully to her family and the arrival of new grandchildren, and to focus mainly on teaching. She initiated the creation of lever harps that young children could learn to play on, until they were tall enough to progress to a concert harp. This evolved into her launching a special program at “Sulamot” Music for Social Change (of the Israel Philharmonic Orchestra) of harp studies for blind and visually impaired children.She developed an idea whereby the red and blue strings be brought out a bit forward so the students could distinguish them from the rest of the strings through touch.

Our beautiful, kind and noble Mother is remembered by so many as an optimistic, charismatic person who always lit up every room she entered. She was always ready to help people; both musically and otherwise. Although her body was beaten by cancer, her spirit remained unyielding, till her last breath. She found constant joy and solace in music and the harp. This philosopohy is best desribed in her own words, from a letter to a friend, dated November 21st, 1996:

“I myself, luckily, was born with boundless optimism and was blessed with a bond to music that is a balm to the soul at moments of disappointment and frustration. At the difficult moments of my life I was able to take the harp in my hands, perform and partake in music making that pushes aside heavy thoughts and emotions, even for a while. This ability always renews my strength and for this I am grateful.”
For more information, please visit https://ruthmaayani.com/index.html 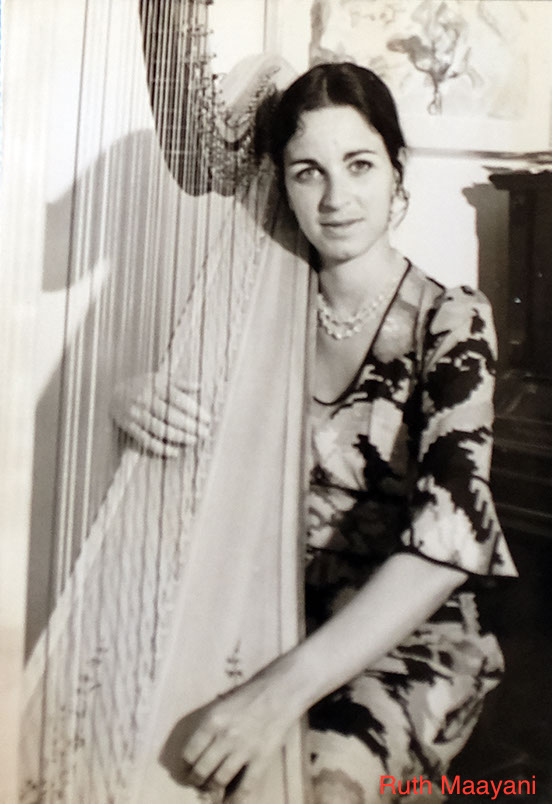