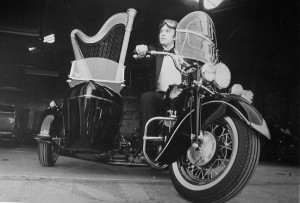 Although Park Stickney claims that it wasn’t his plan at the age of 10 to become a world-travelling jazz harpist, he did, in fact, embark on that path then by competing in the first International Jazz and Pop Harp Festival. Since then, after finishing his studies at the Juilliard School in New York, he has traveled across Europe, Asia and the U.S., as a soloist and teacher, as well as with a variety of ensembles whose music ranges from jazz to classical to rock. Park will be remembered by Israeli audiences for his brilliant concerts during the Israel Harp Festival in October 2011.
[peekaboo_link name=”1″]> Read more [/peekaboo_link]
[peekaboo_content name=”1″]
Stickney has toured Hong Kong, India, and Sri Lanka four times with harpist Daphne Hellman (1995-98), taught and performed at the Umbria Jazz Festival in conjunction with the Berklee College of Music (1998), given workshops and concerts in Scotland for the Edinburgh Harp Festival (2010. 2006, 2004, 2000, 1991), the Edinburgh Jazz and Blues Festival (1996), and the Edinburgh Fringe Festival (1998, 1996). In France, he has taught and given concerts at the Academy of Pierre Jamet in Gargilesse (2009, 1999, 1997), the “Journées de la Harpe.” in Arles (2009, 2004, 1998) , and the Festival de Harpe in Avesnois. Stickney was a guest soloist at the Soka Harp Festival in Japan, the first two Caribbean Harp Festivals in Puerto Rico, the Kansas City Festival of the Harp, the Adelaide Harp Festival, and the 2002, 1999 and 1996 World Harp Congresses.

He has taught and performed in Germany at the Mosenberg Harfentreffen (1998-2007, 2009), and the Süddeutsches Harfentreffen, Violau (2007, 2004, 2002, 1999). In the fall of 1999, he was invited by electro-celtic harpist Rüdiger Oppermann to perform 25 concerts in Germany as part of his International Harp Festival. Stickney returned to Germany the following year, this time for a 10-concert solo tour.
As Rüdiger and Park found themselves constantly jamming together at harp festivals, they decided in 2003 to form an “official” duo, by making the critically acclaimed CD “Harp Summit” (“Two players at the top of their game share their complementary skill and empathy with the music.”- The Harp Column), touring Germany and Korea, and performing at the Edinburgh Harp Festival. This collaboration continued in Rüdiger’s 2004 Klangwelten tour. In Spring 2005 Stickney & Oppermann toured 12 cities in the US, including New York, Philadelphia, Seattle, Boston, and LA. They then did a repeat US west-coast tour in 2009, with stops in Seattle, San Francisco and LA

2002 saw the beginning of a long-term collaboration with the Italian bassist Dino Contenti. In duo, and with other musicians (drummer Manhu Roche, guitarist Moreno D’Onofrio, violinist Rrok Jakaj, saxophonist Claudio Fassoli), they have given numerous performances, primarily in Italy (Asti, Torino, Milano, Bergamo, Palermo, Verona, Bolzano, etc.), as well as in Switzerland, England, Germany, Albania and Spain. This duo in turn led to another group, “Sixty-three Strings”, a quartet made up of Stickney and Contenti plus the guitar duo Manomanouche, which plays the music of Django Reinhardt.

Two new recent projects are a collaboration with Swiss flutist Regula Küffer, with a program entitled “Mozart & More,” which combines classical and jazz works in an improvisational setting, and a classical trio with flutist Immanuel Davis and violist/composer Kenji Bunch, which recently performed a series of concerts for the Chamber Music Society of Lincoln Center’s educational program.

An active teacher, Stickney is visiting Professor of Jazz Harp at the Royal Academy of Music in London and is an assistant at the Conservatoire National Superieur de Lyon.

In addition, he teaches an ongoing jazz class at the Lausanne Conservatoire and the Music Hochschule of Luzern, and has given masterclasses at the Juilliard School, the Berklee College of Music, the University of Minnesota, the Chopin Conservatory in Warsaw, the Hochschule für Musik und Theatre in Munich, the Paris Conservatory, the Barcelona and Zaragosa Conservatories in Spain, the Ecole de Jazz et Musique Actuelle in Lausanne, the Conservatories of Torino, Milano, Bolzona, and Pesaro in Italy, the Royal Scottish Academy in Glasgow, and the Trinity College of Music in London. Stickney has taught at every International Jazz and Pop Harpfest since 1995, and teaches privately in Switzerland, London, and New York.

Stickney recorded his first CD “Overdressed Late Guy,” in 1995, which was followed by a sequel “Action Harp Play Set” in 1999. In Summer 2005 he released “Still, Life with Jazz Harp,” a solo CD with guest appearances by Dino Contenti and drummer Peter Gotzmann.