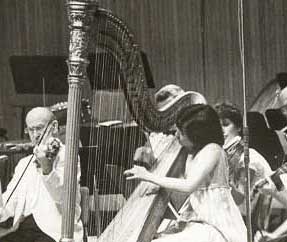 When he discovered that there was no International Harp Contest for Harp existing in the world, Mr. Propes chose the harp, the instrument so closely identified with King David, for his project, marking the 10th anniversary of the State of Israel. The harp’s origins are indeed in the Middle East. Ancient harps, over 3000 years old, were found in Iraq (the ancient Mesopotamia), in Egypt and in Megiddo, in ancient Israel. The modern harp and Israel have become synonymous. He has succeeded to place Israel in the hearts of harpists and other musicians from around the world.

The Contest has also encouraged composition for the harp. It commissions an Israeli work for each contest. The Propes Prize is awarded for its best performance.

Since 1959, the Contest in Israel has taken place every three years. The 17th Contest, in October 2009, celebrated  the 50th Anniversary. A Gala Concert with the Israel Philharmonic Orchestra, conducted by Nir Kabaretti,  opened the Celebrations on October 6th 2009 at the Mann Auditorium in Tel Aviv. Eight Prize winners performed with the IPO on this festive occasion which also saluted the City of Tel Aviv on its 100th birthday.

All the Prize winners have done extremely well in their careers. The First Prize winner in 2006, at the 16th Contest, the was an Israeli from Jerusalem, Mr. Sivan Magen.

The International Harp Contest appreciates and enjoys the generous support, sponsorship and contribution by Lyon and Healy Harps in Chicago.  The First Prize, a Concert Grand Harp has been offered by Lyon and Healy at every Contest during 50 years.

The Contest is grateful to the Israel Government, the Culture Directorate, the cities of Jerusalem and Tel Aviv, to harp builders Salvi Harps, Ayoama Harps, David Harps and Camac Harps, and to foundations and individuals in Israel and abroad for their continuing and steadfast support.

Although the International Harp Contest in Israel is no longer the only harp competition in the world, it remains unique in its excellence and prestige setting the standard for harp performance and focuses world attention on Israel.