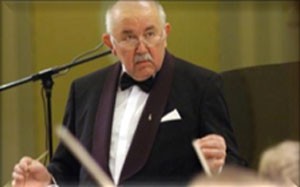 Donatas Katkus is a famous Lithuanian violist, conductor, teacher, musicologist and a prominent personality in Lithuanian culture and art. In 1965 he graduated from the Lithuanian State Conservatoire (where he studied violin with Prof. J. Fledžinskas); in 1971 he was awarded PhD (Mus) at P. Tschaikovsky Conservatoire in Moscow (quartet class with Prof. A. Grigorian and V. Gvozdecki). In 1964 – 1969 he was the Head of the Orchestra Department at Ten-Grade Balys Dvarionas Music School, was a member of the Lithuanian Chamber Orchestra, later of the Composers’ Union Chamber Orchestra. Since 1968, he has been teaching at the Lithuanian Academy of Music and Theatre; Professor since 1995. In 1965 Donatas Katkus organized the Vilnius Quartet and played with it until 1994. In 1995 – 1999 he held summer master classes in Germany, later Finland and Spain. In 1994 he founded the St. Christopher Chamber Orchestra of Vilnius Municipality, which he still leads. Since 1996 he has been constantly touring around the world with this orchestra. Donatas Katkus is a member of the Lithuanian Radio and Television Commission (since 1996), president of the Lithuanian – Irish Society (since1998), vice president of SOS Kindersdorf, Lithuanian Society (since 1999), a Representative of Lithuania in Television without Frontiers, an EU committee in Strasbourg (since 2001). He is also one of few performers –
A member of the Lithuanian Composers’ Union.
For his commitment to Lithuanian culture Donatas Katkus was twice honoured with the National Prize of the Republic of Lithuania: in 1979 (as a member of the Vilnius Quartet) and in 2001.