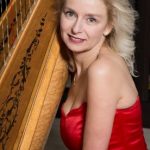 Born in St. Petersburg, Julia Rovinsky graduated from the Rimsky-Korsakov Academy of Music. In 1988 she was a prize winner of the National Harp Competition in Moscow.

Since immigrating to Israel in 1991 Julia Rovinsky has become a central figure on Israel’s concert scene.

She appears regularly as soloist and in many chamber music ensembles and has taken part in many festivals in Israel and around the world.

Julia Rovinsky is Principal Harpist of the Israel Philharmonic Orchestra and teaches at the Buchmann-Mehta School of Music, Tel-Aviv University.

In 2002 she won the Prime Minister Prize for best performance of Israeli music.

Since 2016 she has been Music Director of the International Harp Contest in Israel.

In recent years, Julia Rovinsky has recorded several CD’s, both for solo harp and chamber music. 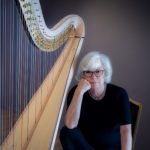 Catherine Michel began her studies of harp, piano and solfège with her mother. When she died prematurely, Pierre Jamet took charge of her and welcomed her to the CNSM in Paris. At the age of 15 she already won 2 major international awards in Israel and USA.

In 1971 she joined the national orchestra of Radio France where she worked under the direction of L. Maazel, L.Bernstein and more. In 1978 she was named harpist at the National Orchestra of the Paris Opera. She recorded the concertos of Villa-Lobos, Rodrigo and Castelnuovo-Tedesco with the Monte Carlo Orchestra.

At EMI, she accompanied the great trumpet player Maurice André in a varied repertoire ranging from Bach to Steven Sondheim with the Normandy Chamber Orchestra and LSO in London.
Her teaching activities led her from the Royal Academy of Music in Dublin to Hochschule für Musik from Hamburg then Detmold then to Zurich. In 2010 to she devoted herself to his life as soloist and visiting professor of the Royal College of London. She is currently Professor at the Academy Musica Mundi of Waterloo Belgium and EISM of Aix en Provence. 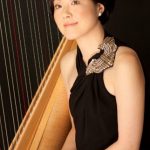 Ms. Anraku has been Associate Principal Harpist of the Metropolitan Opera Orchestra since 1995.

Ms. Anraku has an impressive list of awards, which include First Prize at the First Japan International Harp Competition, First Prize, Channel Classics Recording Prize etc. Ms. Anraku’s strong commitment to contemporary music and the expansion of the boundaries of the harp repertoire has included an invitation to premiere works by Toshio Hosokawa in Germany, Austria, and festivals in Germany, collaborating with traditional Japanese musicians and monks.

Ms. Anraku is an exclusive recording artist with EMI Classics. Her three solo recordings include works by Händel, Scarlatti, Rota, Fauré, Debussy, Satie, Hindemith and more.  She holds bachelor’s and Master’s Degrees from The Juilliard School and is a recipient of an Artist’s Diploma from The Glenn Gould School in Toronto. 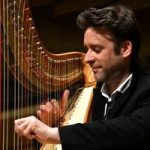 French harpist Sylvain Blassel graduated in 1998 from the Conservatoire National Supérieur de Musique de Lyon where he studied with Fabrice Pierre. Harpist and conductor at the same time, he immediately starts as assistant conductor with the Ensemble InterContemporain where he stays 2 years and where his meetings with conductors such as Pierre Boulez, György Kurtag, György Ligeti, Brian Ferneyhough, or Helmut Lachenmann have been decisive for him.

Willing to expand his repertoire, Sylvain Blassel has become a specialist in transcribing or adapting a heritage spanning a period going from Guillaume de Machaut until today’s music. Starting from the premise that the piano often requires a much higher dexterity than the harp, he has been working on developing a technic that enables him first to address pieces amongst the most dreaded by pianists (Liszt’s Campanella, Hungarian Rhapsodies…) but above all, the major masterpieces of the repertoire including the J.S. Bach’s Goldberg Variations and Beethoven’s last sonatas.

Passionate about organology and period instruments, he carefully selects the harp according to the piece he plays. 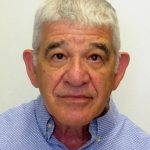 Prof. Zeev Dorman, Head of the Buchmann-Mehta School of Music at Tel Aviv University, has made a significant mark as a conductor, instrumentalist, educator and administrator. He studied conducting and musicology at the Samuel Rubin Academy of Music in Tel Aviv and at Guildhall School of Music in London, where he specialized in opera conducting. In 1987 he was recipient of the Francois Shapira Prize in conducting. He has conducted major orchestras in Israel and abroad, among them the Israel Philharmonic Orchestra, with whom he has also performed as soloist.

In 1986 Zeev Dorman was appointed Assistant Music Director of the Israel Philharmonic Orchestra, and from 1987 to 2004 served as Music Director of the Young Israel Philharmonic Orchestra, which he conducted in concert tours and festivals in Germany, Switzerland, Spain, Russia and China. As conductor, he has performed with leading international soloists, among them Yo Yo Ma, Mischa Maisky, Maxim Vengerov and Julian Rachlin.

With the establishment of the Buchmann-Mehta School of Music in cooperation with the Israel Philharmonic in 2004, Zeev Dorman was appointed Director of the school’s Orchestral Training Program. He has served as Head of the School of Music since 2009. During his term of office, he has dedicated himself to development of the program of studies in all practical performance tracks and academic fields, as well as instituting teachers’ training programs. Prof. Dorman has furthered cooperation with academic institutions internationally, thus reinforcing the school’s stature in Israel and abroad. He implemented several physical improvement projects, updating and enhancing the school’s facilities to the benefit of students, faculty, staff and visitors.

One of the most sought-after Czech harpists of her generation and a fresh recipient of the Prague Classic Award 2018, Katerina Englichova performed all over Europe, North America, Japan, Hong Kong, Australia, and New Zealand.

She has collaborated with artists such as Mstislav Rostropovitch, Josef Suk, Gerard Causee, Cynthia Phelps, and more. She played with many ensembles, including the Skampa Quartet, the Prazak Quartet, the Haas Quartet etc. She has performed at numerous international festivals such as Tanglewood and the Tucson Music Festival in the USA, Music by the Red Sea in Israel, Pacific Music Festival in Japan, Rencontres Musicales d’Evian and Festival d’Ile de France, and many others. Ms.Englichova has made her American recital debut in Weill Hall at Carnegie Hall, New York in 1998. Her debut with the Czech Philharmonic Orchestra took place in January 2008.  Other distinguished venues where she has played include the Beethoven Saal in Bonn, Chamber Music Hall of the Berlin Philharmonic, Auditorio Nacional de Musica de Madrid, the Concertgebouw Amsterdam, the City Hall Hongkong etc. She has appeared with the Philadelphia Orchestra, the San Francisco Chamber Orchestra, Concerto Soloists of Philadelphia, the Hongkong City Chamber Orchestra, the Budapest Symphony Orchestra, the Czech Philharmonic Orchestra, the Prague Philharmonia, the Brandenburg Symphony Orchestra etc.

Englichová worked with conductors such as Leonard Bernstein, Riccardo Muti and others. Katerina Englichova won many awards, among them the Pro Musicis International Award, 1st prize in the Torneo International Competition in Italy, Prague Radio Broadcast Competition, Concerto Soloists Competition in Philadelphia and more. She is a member of the Dvořák ´s Society as well as the World Harp Society.

Katerina Englichova studied at the Prague Conservatoire, the Curtis Institute of Music in Philadelphia, (she is a Fulbright recipient) and at the Hochschule fur Musik Hanns Eisler in Berlin. She has given master classes in the USA (Juilliard School of Music, The Curtis Institute of Music, Miami Uni., Arizona State Uni., etc.), Canada (Toronto, Montreal), Hong Kong, Great Britain (Royal Academy of Music), Italy, Luxembourg, and the Czech Republic.

Katerina Englichova has been a member of international competition juries and the Head of Jury of the first Czech „Karel Patras Harp Competition“ in Prague. She was invited to be a juror of the Israel Harp Competition 2018. 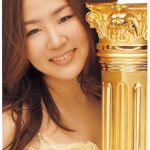 Ms. Kwak also holds record for Korean artist with performances in Israel. As a recording artist, she has released 6 CDs, <Jewels>, <The Gift>, <Vivace>, <Toccata>, <Angelic Moment>, <The Best> with Universal Music. In April 2016, she gave a huge successful sold out concert at Carnegie Hall with Harpyday Ensemble and a masterclass at Curtis Institute of Music. In 2017, she was invited to Alba Italy-USA Muisc Festival and toured all over Italy. Ms. Kwak has been on a jury for many national and international competitions, most recently the Mexico International Harp Competition in November of 2017.

Jung Kwak received her Bachelor of Music degree from Indiana University with world renowned Susann McDonald whom she studied from age 14 and Master of Music degree from Kathleen Bride at Eastman School of Music, receiving Performer’s Certificates from both schools. Ms. Kwak is the first harpist in Asia who made her mark with a continuous exploration of all sides of the musical spectrum in concerts, recordings, teaching as well as creating a unique musical experience that is both classical and contemporary. She is one of the top harp teachers in Korea. Her young students have won prizes in many international prizes and auditions throughout the world.

Jung Kwak is currently on the faculty of Choong-Ang University, Yae Won Music, Art, & Dance Institute, Seoul Art High School and Music Prodigy Academy of Seoul Arts Center. She is also the ambassador for United Help for International Children and Green Umbrella Children’s Foundation. She is the founder and the Artistic Director for Korean Harp Festival, Harpyday Ensemble, the co-director of Korea International Harp Competition, and the co-founder of Asia Harp Festival. Jung Kwak is currently on the board of directors of the prestigious USA International Harp Competition and the World Harp Congress. 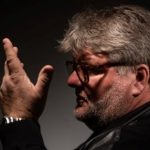 Grammy nominated cellist/conductor Dmitry Yablonsky was born in Moscow into a musical family. At a very early age, he showed musical talent and at six was accepted at Central Music School for Gifted children. Cello became his instrument and at 9 he played Haydn C major cello concerto with Gennady Provatorov conducting. During these few years before immigration, Dmitry has performed in many cities of the former Soviet Union.

Upon arriving in New York City, in June 1977, Dmitry auditioned for Juilliard School of Music and was accepted. After Juilliard, he went to Curtis Institute of Music and then spent 4 years in Yale University. In 1979, he was invited to participate in the Marlboro

Starker and many others. In Yale Dmitry took conducting class with Otto Werner Muller, who is considered one of the most influential conducting teachers in USA.

Many world name orchestras and musicians come to share his musical experience. He has made more than 80 CDs for Naxos, Chandos and Warner/Erato labels. He is Honorary Academician of the Independent Academy of Liberal Arts at the Russian Academy of Sciences, Artistic

Personality of Azerbaijan, Professor and Head of International Relations at the Buchman-Mehta School of Music at Tel Aviv University. 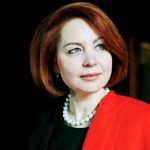 Born in Moscow, Ms. Zingg holds a degree with honors from the Moscow State Tchaikovsky Conservatory; her career began in Moscow in the earlier 1990s as principal harpist with the International Harp Duo “Ailos Harp”. After the fall of the Soviet Walls, her career took an international emphasis: living in the Middle East, she premiered new music, lectured for cultural foundations, founded the school educational program “Harp and More”, and initiated a highly acclaimed chamber music project “Hommage to Feiruz” exploring new dimensions of the harp in context of oriental music.